Happy New Year!  This time of the year we often reflect on the year just ending.  Last January, rather than the traditional resolution, I decided to select a word to focus on in the coming year – JOY became my carefully considered word!   It was a small but powerful word that helped me find joy in the simple pleasure of life, whether waking up to a sunny day, seeing glimpses of nature on a morning walk that I hadn’t noticed before, or getting good news of any kind from family, friends etc.  I had no idea how powerful this little word would be for me.

During the last few months of 2017, my husband, Lloyd, found me one morning as I was planting flowers in late September to let me know he was having chest pains. We immediately went to the emergency room to have him checked out.  After 4 hours getting blood work, EKGs etc., they determined that he had not had a heart attack, but something was going on and we were referred to a cardiologist in Bedford, VA, his hometown and where we have a home.

After a visit with the cardiologist on Oct. 4th, an echocardiogram and stress test were scheduled for Oct. 9th, however the stress test was canceled after the echo determined he had blockage.  We were sent to Centra’s Lynchburg General Hospital and Stroobants Heart Center for a heart catheterization.   By noon that day it was determined that Lloyd had 3 blockages to his heart that would require quadruple heart bypass surgery; one blockage, dubbed the widowmaker, was 99.9% blocked! The surgery on Oct. 11th, lead by Dr. Kenneth Saum and his team, was a success!  Though we had read about Lynchburg General in Consumer’s Report as being ranked 3rd in the Southeast for hospitals and a national benchmark facility for cardiac care, we had no idea what a valuable resource we had at our back door!  We gave much thought into coming back to Raleigh, though his recuperation post-surgery for the past 3 months has been enhanced by the beautiful Blue Ridge Mountains at our front door! 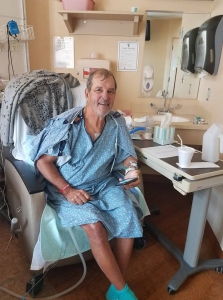 JOY became a real touchstone through the following hard days. We woke up looking at the stunning fall colors changing every day, gradually walked around the yard in-between much needed rest, and enjoyed small plates of food. Eventually longer walks happened, and with more doctor’s appointments offering encouragement and progress, cardio rehab finally began late November.  Lloyd has now graduated to hiking with his turkey dogs in the mountains and hunting turkeys, though he cannot yet shoot a gun.  He is focused on his goals of getting fully back to turkey, duck, and goose hunting, and golfing by spring.  His surgeon told him that in 4-6 months he should be completely healed. 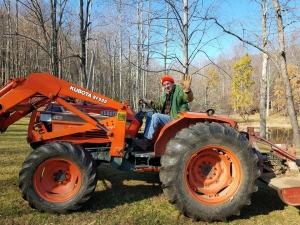 Through all of this we had hundreds of cards from family and friends almost daily, sending love and encouragement.  After we were home, visits from friends and family with comfort food and kindness warmed our hearts and filled us with nourishment and pleasure!  Flowers and other gifts arrived at our door making us feel so special and touched by the generosity and love being showered upon us.   Our hearts were healed and more opened by these small things that brought us both JOY in every day.

After he was released to drive on Nov. 9th, I returned to Raleigh for the first time in 6 weeks!  I was unable to focus on much other than rescheduling appointments on my calendar for another time in the future and felt I was NOT carrying my share of responsibility for Rich Commercial Realty with my partners. They were extremely supportive and told me in no uncertain terms that “we have your back” – another grace that brought JOY to my heart and tears to my eyes.  Through all of this, we had another record breaking year in 2017!  I could not be more proud of this special team and all we have accomplished!

2018 brings about a new word that I am focused on – FLOW, meaning to go from one place to another in a steady stream, or a steady, continuous stream of something. It wasn’t until I fully looked up the definition of the word that I realized it is a synonym of circulate or circulation, appropriate for someone now schooled on heart surgery and the significance of a blockage. I am now focused on my word keeping me on the right course with ease no matter what daily challenges might arise. My wish for you all is ease in everything you do, and above all, good health and happiness in this New Year!